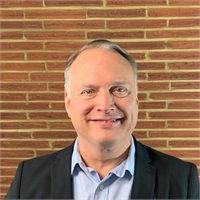 "Chief Cook & Bottle Washer", aka President of Calrose insurance. Don began his career in the insurance industry in 1985 as an agent for an organization that gave him experience in both personal & commercial lines of insurance. As a managing partner, he wrote small person accounts and large multi-location commercial accounts. Don purchased Driver's World Insurance in 2012 which became Calrose Insurance in 2018. In Don's free time his priorities are his faith, family and music. He and his son share a enthusiasm for the guitar and have each built their own instruments. When he is not playing in his worship band at church, you will find him on his tractor working on a "honey-do list", watching "scary movies" with his daughter, or "exercising self control" on the golf course. When on vacation you will find Don in Hawaii, he got hooked on his honeymoon.